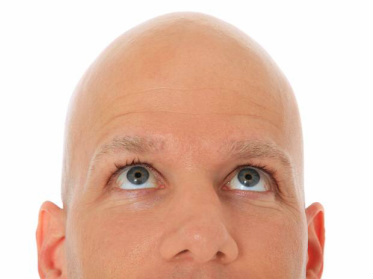 Hair loss comes in a number of different forms
What type of hair loss are you suffering from?

Listed below are the main types of hair loss and the characteristics of each type.

Androgenetic Alopecia (AGA)
Also known as male pattern baldness. It is a thinning of the hair to an almost transparent state, in both men or women. It is thought to be a hereditary form of hair loss.


Traction Alopecia
Traction alopecia is usually due to excessive pulling or tension on hair shafts as a result of certain hair styles. It is seen more often in women, particularly those of East Indian and Afro-Caribbean origin. Hair loss depends on the way the hair is being pulled. Prolonged traction alopecia can stop new hair follicles developing and lead to permanent hair loss.

Scarring Alopecia
A form of alopecia which leaves scarring on the area of hair loss.

Telogen Effluvium
A form of hair loss where more than normal amounts of hair fall out.

There is a general 'thinning' of the hair. Unlike some other hair and scalp conditions, it is temporary and the hair growth usually recovers.

Telogen effluvium
You may experience temporary hair loss weeks to months after a stress episode like child birth, fever, severe illness, stress or sudden weight loss which decreases gradually in a few months. Such type of hair loss is called Telogen effluvium. This happens due to changes in the growth cycle of hair when a large number of hair go into the resting phase (telogen) at the same time.

Involutional alopecia
The rate of hair growth slows as you age causing the thickness as well as volume to reduce. In this type of hair loss called Involutional alopecia, the hair follicles gradually go into the telogen (resting) phase. The remaining hair becomes shorter and fewer in number.

Firstly, you need to get your basics about hair growth. The average scalp contains about 100,000 to 150,000 hair. The normal hair life cycle lasts for 2 to 3 years. At any given point of time, about 90% of the hair on your scalp is growing and about 10% of the hair is in a resting phase. After 2-3 months, the resting hair is shed and new hair starts to grow in its place. It is normal to shed some hair every day. You lose roughly 100 hair strands every day. But, some people may experience more than normal hair loss. Such partial or complete loss of hair is called alopecia.
Diagnosing what type of hair loss you suffer from is the first step to treating it. You may have heard about terms like Androgenic alopecia, involutional alopecia, telogen effuvium. In this post, we explain more about each of these types of hair loss.

If you are a male with a receding hairline and gradual disappearance of hair from the crown, you may be suffering from Androgenic alopecia(also called male pattern baldness). In this condition, you may experience hair loss as early as in your teens or early 20s. Men with androgenic alopecia may notice hair loss at the top of the scalp and a receding hairline particularly along the temples. The typical pattern begins at the hairline which then gradually moves backward and forms an ‘M’ shape. Finally the hair becomes finer, shorter and thinner creating a U-shaped pattern of hair around the sides of the head. Miniaturization of hair (progressive decrease of the hair shaft’s diameter and length in response to hormones) is characteristic of androgenic alopecia. Hair follicles that are producing healthy hair begin to produce thinner, shorter, more brittle hair with weaker shafts. It is a genetically predisposed condition that can affect both men and women.
If you are a woman with general thinning of the hair over the entire scalp, extensive hair loss at the crown with your hairline at the front intact, you may be suffering from female pattern baldness. Your hair part may become wider with time. As hair thinning occurs, the scalp becomes progressively more visible. The hair loss rarely progresses to total or near total baldness. You may notice hair thinning in your 20s but you are not very likely to experience noticeable thinning until your 40s or later because the pace of hair loss tends to be gradual.
Alopecia areata or patchy hair loss If you have a child or are a young adult with one to two totally smooth, round patches of hair loss mostly on the scalp, you may be suffering from Alopecia areata or patchy hair loss. The hair loss may also be seen in the eyebrows, arms, legs or on facial hair. It is often sudden in onset and the hair usually grows back in six months to a year. However, when the hair grows back in one area, it may fall out in another. In some people the hair may become thinner without any patches of baldness. In others, it may grow and break off, leaving short stubs which resemble ‘exclamation points’. Alopecia areata is generally considered an autoimmune condition, in which the body attacks its own hair follicles. In alopecia totalis, an extensive form, the entire scalp goes bald.

Ringworm of the scalp (Tinea capitis)

Tinea capitis (ringworm of the scalp) is a fungal infection of the scalp which usually affects school-age children and goes away at puberty. It’s rare in healthy adults. It involves only parts or whole of the scalp. Hair breaks off at areas that are infected causing bald scalp with small black dots. The skin has inflamed (red swollen), round, scaly areas with pus-filled sores called kerions. The child may have a low-grade fever or swollen lymph nodes in the neck. It is contagious and can spread from sharing combs and hats. Once the infection is cured, the hair grows back.

Hair pulling disorder (Trichotillomania) Some people have the habit of voluntarily twisting or pulling their own hair from the scalp and eyelashes. This is referred to as Trichotillomania or Hair pulling disorder. It is a psychological disorder seen most frequently in children. Hair patches in this condition show broken-off hair. Source http://health.india.com/alopeciaonline.org.uk